Where are they now: Adam Plant 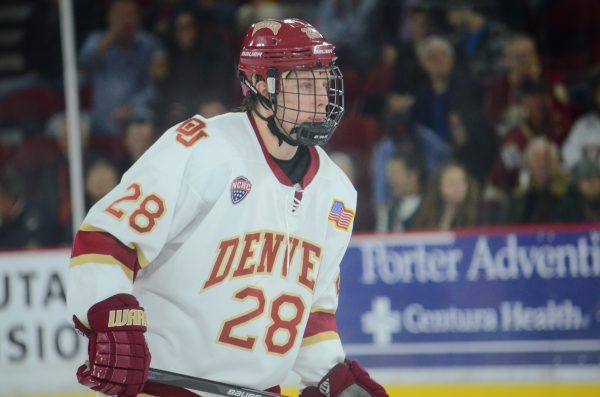 17 Aug Where are they now: Adam Plant

Adam Plant’s time at the Okanagan Hockey Academy was huge in helping him reach where he is now – a defenceman for the Laval Rocket.

After completing a four-year career with the University of Denver Pioneers, where the Penticton native won a National Collegiate Athletic Association Division 1 championship in 2016, he signed a one-year contract with the Montreal Canadiens American Hockey League affiliate, playing seven games last season.

“The way I look at it, OHA is kind of like prep for college,” says Plant, who was with OHA from 2010 to 2012, then played two seasons in the B.C. Hockey League with the West Kelowna Warriors. “You’re a full-time student and you’re playing with a pretty heavy schedule. You have to learn how to balance school as well as athletics, getting into the gym training. OHA is exactly what college was. You are around the same guys all day at school and then go to the rink and you are with them all day. It really helps you kind of develop that mindset.”

There are many people at OHA that Plant credits to helping him achieve success. Former NHL defenceman, Robert Dirk, was his coach and Plant says he is one of the best coaches he ever had. Dirk is someone Plant would go to no matter what the situation. Plant also appreciates Rob McLaughlin who has helped him.

“He is a world class skating coach. I’m working with him now. So many great staff there.”

Plant says another area that OHA helped shape him is with time management and among the characteristics he values is learning the importance of work ethic from Dirk and that he isn’t above anyone ever.

“You have to come and work and earn everything,” he says. “I have never been drafted. I never had anything. It’s something I learned here is you have to earn everything you get. Nothing is ever going to be handed to you. I think it has led to a lot of my success.”

With his parents, he appreciates all the sacrifices they made for him, money-wise and time they gave. Getting an education was important.

“You can’t even put into words,” he says. “Can’t even begin to thank them for it. So grateful.”

Plant, who earned a diploma in finance, says he always did well in school and finished university with a grade point average just under 3.4. While he has his finance diploma, Plant laughed saying he hopes to do nothing with it.

“Keep playing and make a career out of hockey,” says Plant, during a break from his workout. “It’s nice to have that as something to fall back on. Hopefully it’s something that helps me manage money.”

As he moves onto a new chapter in his life playing in the AHL and living in Laval, Que., everything he has picked up matters.

“The things I learned, hard work, dedication,” he says. “That’s what gets people to move on to the next level.”

Plant joined a Laval team that did not qualify for the playoffs making it a bit of a tough situation with several call ups getting playing time. However, that ended up being good for him to get time. He got chances to play in every situation and is confident heading into his first full season of pro hockey.

“First two games were an adjustment. After that I felt really comfortable,” he says. “I adjusted to the bigger bodies and a little more speed. It gave me confidence going to next year for sure.”