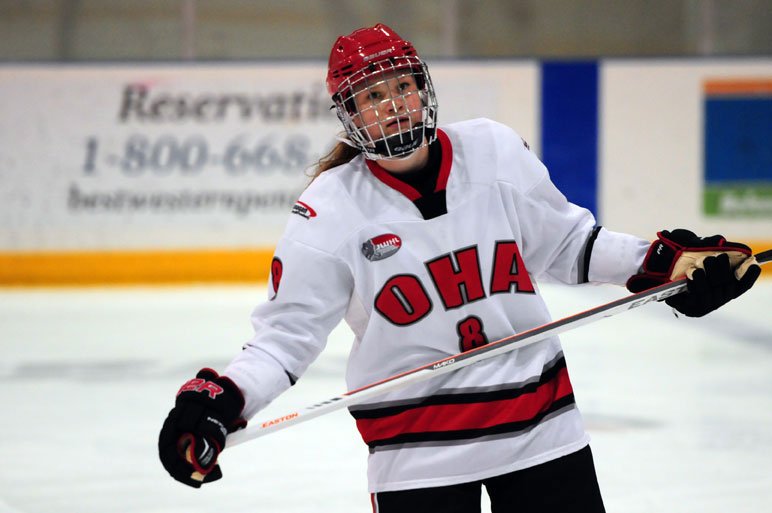 That is what the Okanagan Hockey Academy (OHA) was to Micah Zandee-Hart in helping her be where she is now.

The former captain of the OHA Female Prep team is in her third season with the Cornell University Big Red women’s hockey team. She is the captain and took on the same responsibility for Team Canada’s Women’s National Development squad in a series against the U.S. last summer.

Zandee-Hart talked about OHA being an entire package, especially with the number of girls the organization has assisted in advancing to the next level being the National Collegiate Athletic Association (NCAA) or U Sports. She credits the coaches and support staff in being a big part of why so many girls are able to take that next step.

Coming from Saanichton on Vancouver Island, “not exactly the hockey hotbed of Canada” as she says, to be in Penticton surrounded by like-minded people, who wanted to get better each and everyday, and really push each other, that helped her a lot. It helped in growing as a person. The efforts of her coaches is something she is grateful for. Also key in her development were teammates. She came in at the same time as Emily Clark, who won a silver medal with Canada at the 2018 PyeongChang Olympic Winter Games. She also played with Brielle Bellerive, Alyssa Erickson, Emma Keenan, Hannah Miller, Payge Pena, Alexa Ranahan and others who went on to play NCAA Division 1.

“You want to have those players on your team that are going to push you in practice everyday,” she explains. “Playing the other skilled teams in our league was huge as well. The everyday intensity of our on-ice practices and our workouts in the gym which each other, kind of the compete level, had a big impact on my hockey career.”

The five-foot-nine defenceman made her international debut with Team Canada in 2013 against the U.S. She played for the women’s team in 2016 and earned a gold medal at the 2014 IIHF U18 Women’s World Championship. The next year as Canada’s captain, she earned a silver medal at the same tournament.

She says the academics with Penticton Secondary School are second to none with Dave Nackoney playing a key role. Nackoney has been praised by other OHA grads for how he helped them as he places an emphasis on academics, helping them develop strong study habits. While playing hockey with Cornell University, Zandee-Hart has done well with her studies in the College of Arts and Sciences.

“For the female side of the game, we are not going on to sign pro contracts right out of high school,” says Zandee-Hart, 21, who is majoring in psychology with an English minor and would like to become a clinical psychologist and work with players. “We are going the NCAA and U Sports route. I think to have that academic focus and not just have it be all hockey all the time was a huge aspect for me.”

She points out that developing relationships with teachers is key, especially when the player knows they have to miss class and may have to come in early to do extra work.

“These (are) life skills that I don’t think regular students have going into college,” she adds. “Having that experience at OHA really set you up for success going into the college environment.”