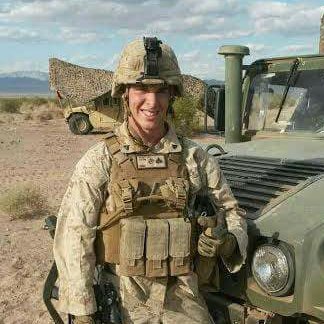 The experiences of what marines like himself had to do and deal with, carry weight he said. Wesley questioned things that happened and why – if he could have done anything different.

“Remembrance Day is definitely a tough day,” said Wesley. “I have lost friends in Iraq and Afghanistan. I’ve had quite a few friends commit suicide because of things that have happened.” 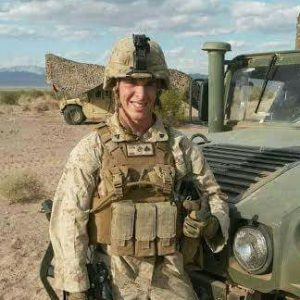 Wesley, 26, spent five years in the marine corps as a radio operator with the Romeo Battery 5th Battalion, 11th Marines before ending his career as a sergeant. He served in Afghanistan and Guam and small islands in the Pacific Ocean.

There are good things to celebrate, however. Nov. 10 is a special day because there is a large celebration marking the Marine Corps’ birthday. Wesley said in Canada there are not as many ex-marines, but he gets “very nostalgic.”

“I miss my friends quite a bit. I keep in contact with them,” he said. “It’s definitely nice to hang out.”

A highlight of Wesley’s time in the marine corps was weekend barbecues. Marines gathered in the platoon on Saturdays in the summer. They would eat, drink and hang out. Because they didn’t get paid a lot in the military, they would go and buy kiddie pools and fill them up and lounge on the barracks’ basketball court and play sports.

“It was a blast,” said Wesley.

Wesley learned early in his life about the military because he had family members who served. Sean Bacon, a friend and mentor, helped Wesley train for the marine corps a year after graduating from the Okanagan Hockey Academy (OHA) in Penticton, where Wesley and his family moved to when he was 13.

“My passion for the military began at a young age because I always wanted to live a life of adventure,” he said. “I wanted to test myself and see if I could rise to the trials and tribulations that come with military life, and finally serving with a brotherhood.”

Wesley credits his successful career in the marines corps to the time he spent at the OHA from 2007-10.

“The demand is so high there,” said Wesley. “The fact that you can’t be an undisciplined student inside the academy. You can’t be undisciplined on the ice or any type of those things that compromise your team or the face of the Okanagan Hockey Academy or else you get kicked out. These are all things that I learned there. The translation from OHA to the military helped me out tremendously.”

It was at the OHA, where Wesley’s father former NHLer Blake Wesley works, that Matthew learned to sacrifice and give back to something greater than himself. The team supported the community by helping where it could and he learned to work as a team with student-athletes from Japan, Russia and Switzerland. Along the way Matthew learned to put team goals ahead of his own.

Currently, Wesley is working with Bacon at Dynamic Shift Consulting specializing in mental toughness and resilience training. He has also applied to the Victoria police department and his application is being processed.